Amsterdam (The Netherlands) – This is my first article as a columnist for Amazônia Real. This opportunity opened when I contributed to this independent journalism agency with the text “The death of the pajé Tëpi Matis and the disembodied force of the snake.” I hope to show in this space the paths that connect the Amazon and Europe, the indigenous, the riparians and the metropolis’ people.

The ancient drink Ayahuasca or Santo Daime is one of the powerful forces that connect these worlds. It is a doctrine born of the encounter and circulation of many traditions such as popular Catholicism, the vegetative shamanism of the forest and the Afro-Brazilian umbanda. The forest beings coexist in rituals with saints and orixás (1) and the result is a unique and powerful experience for those who humbly surrender to learn what ayahuasca, beverage prepared with the jagube vine and the leaves of the chacrona, has to teach. 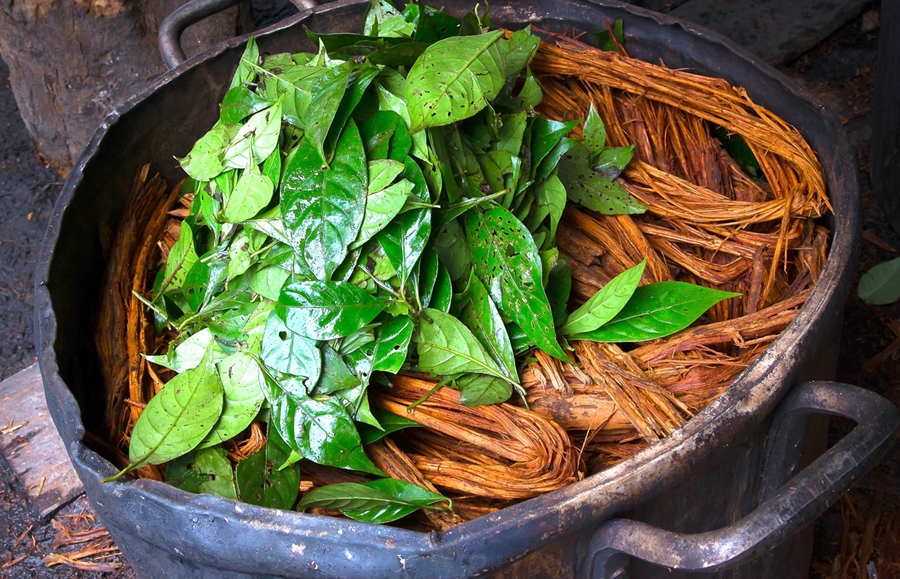 Ayahuasca is prepared with the jagube vine and the chacrona leaves collected in the Amazon forest (Photo: Santo Daime)

The godfathers of Daime are modest men and women who have learned to love the Amazon and they teach us how to pay respect and to love the forest. Under a blue Sunday sky, we arrived for a Daime ceremony at the Buiksloterkerk church in the Amsterdam Noord neighborhood, the young socio-environmental scientist Markus Enk and myself. We came riding, the two Brazilians, on my little black bike, from Central Station, we crossed the river IJ with the ferry boat (that carries people and their bicycles and scooters).

Markus was the one who invited me to the ritual, he is doing an academic essay for a course he attends at the University of Leiden with the Daime in The Netherlands. We met because Markus wants to learn how to speak Matis with me. Matis is the language of the indigenous people with whom I studied, indigenous people that have adopted me and that live in the Javari Valley, in the Amazon. Markus is also a friend of the young Matis shaman Chapu of the Jaguar.

The Matis united us and here we are in Holland, so far from the forest, but with our thoughts and life projects intertwined in the cipoal (2) (vine entanglement) and the chavascal (3). We come to the session and to meet the spiritual masters of the forest. It would be the first time that I would take ayahuasca in Europe.

This Sunday’s ritual was in memory and in honor of Geraldine, one of the creators and founders of the church in The Netherlands. We will sing a hymnary from her and another one from Maria Rita Gregório, godmother of Céu do Mapiá, a Daime community located in the Purus National Forest, in Pauini, in the state of Amazonas. We left our heavy coats at the entrance, and we dress up white clothes of those who are not uniformed in the doctrine.

I enter and I am happy to recognize the painted faces of Mestre Irineu, Mestre Sebastião, Madrinha Maria Rita looking at the people from the walls of this old Protestant church that now houses this doctrine that came all the way from the Amazon forest. 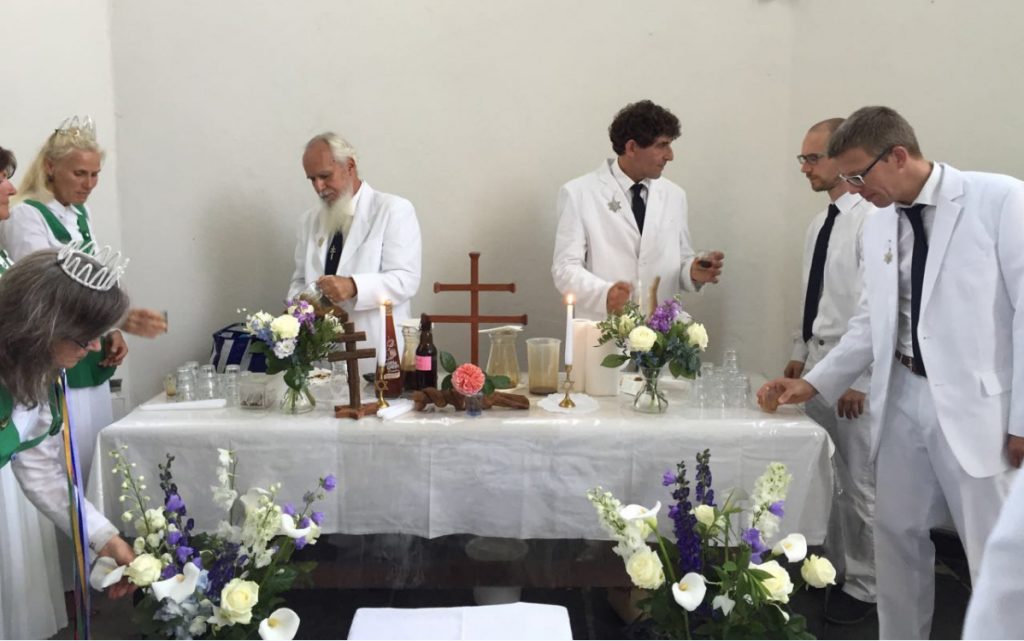 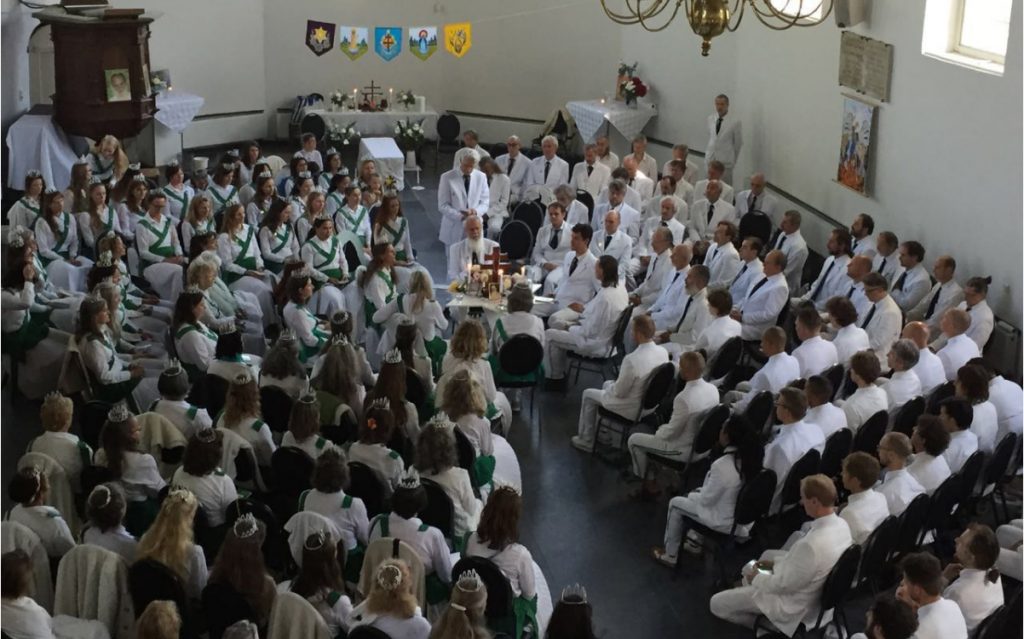 The ritual begins, many Dutch people have white hair, but there are also several young ones. The hymns are sung in Portuguese, but some of the prayers are in Dutch. Before taking the B. Caapi vine with the P. Viridis leaf, we sing to the Daime, whom we call the teacher of the teachers. One of the people who introduced themselves to me before the ritual began is my colleague from the Free University of Amsterdam. Here we are,  the university professors, ready to learn from the caboclo masters, to receive and to give love.

The church is called the Mary’s Heaven. We will drink daime and, the ones who want  it will also smoke the Santa Maria (marijuana) that here in Holland is legal, so as the daime. The hymnbook we sing is the “White Moon”. The musicians sit around the table playing  violin, transverse flute, guitars and soon the chanting fills up the room. I remember the times when I took ayahuasca in Tabatinga (AM), São Paulo (SP), Foz do Iguaçu (PR) and Florianópolis (SC), sometimes with riverine people, or with indigenous peoples, and some other times with non-indigenous daimists .

With the Marubo, I participated in Atalaia do Norte (AM) and in the Vale do Javari Indigenous Territory in sessions that mixed the drink of the vine with snuff power  composed of tobacco and other macerated plants blown via the nose by canes of bird bones or long pipes made of vegetables. I learned from a young pajé Marubo that the pipe of aspiring snuff is like a stethoscope, he compared anthropologies to make the medic doctor Deise Francisco and I better understand what is the snuff power, another substance of diagnosis and cure for Amazonians.

Ayahuasca has been scientifically experimented in treatments to combat alcoholism, drug abuse and depression. Drinking the vine is not recommended for anyone who has a history of psychotic disturbances as it can trigger outbreaks. The therapeutic use of Ayahuasca also gained space in other environments, such as the prison system. In Ji-Paraná, in Rondônia province, inmates participated in Daime sessions as part of their resocialization processes.

My professor Oscar Calavia Saez wrote that the Indians were subjected to many missionary actions, but the ayahuasca religions can be understood as a reverse missionary action, a path that goes from the forest to the big cities. There are now ayahuasca churches in South Africa, Australia, the Netherlands and many other countries.

The Amazon is a place where people from many corners of the world meet, some also get lost in it and many others died there and, unfortunately, still die in the various wars and massacres that are still being fought for oil, logging, drug trafficking and state-led projects. Ayahuasca is one of the ceremonies that bring together different people, mulattoes, blacks, whites, Asians and indigenous natives. The Indians are expert chemists and they always experiment with the rich plant flora of the Amazon. We owe,  to them and to the riparians people who inherit Afro-Brazilian traditions and a devout popular Catholicism, the union that ayahuasca offers.

In the middle of Amsterdam, I feel a great wave of gratitude while staring at the calm face of Master Irineu watching us dance and sing around him. He was born in Maranhão in the late 19th century, then he migrated to the jungle to work in the rubber plantations and met the shamanic drink with Peruvian shamans.

The word Daime comes from the song “Give Me Strength, Give Me Light and Give Me Love,” words of the hymn we sang at the opening of the works. “Dai-me” in Portuguese can be translated into “Give me” in English. Many of the old ladies and gentlemen who danced and sang between 2 pm and 8 pm at Buiksloterkerk had been once or several  times in the community of Céu do Mapiá in the Amazon, some of them had been there almost 40 years ago. One lady tells me that she had also visited the Kamayura Indians. The caboclos masters had gathered at the Ayahuasca ceremony in the middle of Amsterdam, near the Arctic Circle, in these distant lowlands. This is one of the Amazons present in contemporary Europe. Well, it is not so strange or exotic, because all of us are in need of a little more strength, light and love, as Mestre Irineu had taught. 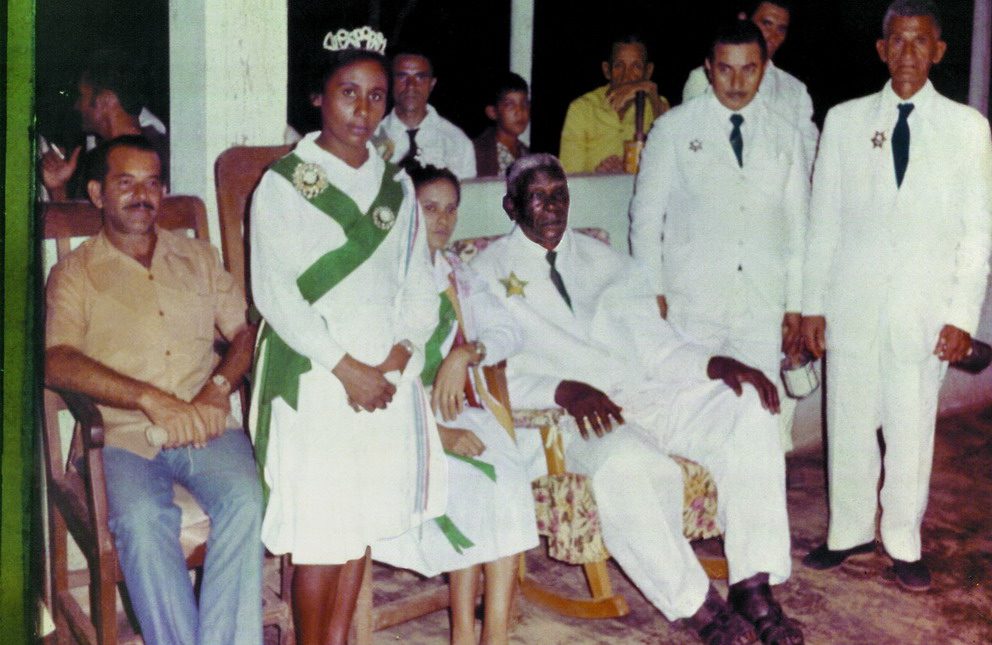 Mestre Irineu, in the center of the picture (Archive picture: Santo Daime)

(1) Orixá is a manifestation of divine beings in the candomblé and umbanda religions.

(2) Cipoal is a landscape full of lianas, that makes it quite a closed environment and difficult to trespass. In Brazilian Portuguese, we use it as a metaphor refering to complicated and complex situations.

(3) Chavascal is a concentration of vegetation in the forest, refered as well to the pupunha palm trees or other spine vegetation that grow in water areas.

Barbara Arisi is a journalist (BA in Social Communication, Federal University of Rio Grande do Sul) and an anthropologist (MSc and PhD, Federal University Santa Catarina, with an internship in the University of Oxford). As a reporter, she worked in Zero Hora newspaper. She was born in Porto Alegre (RS) and she lived in Foz do Iguaçu (PR), Florianópolis (SC), Sao Paulo (SP) and Manaus (AM), Amsterdam, Maastricht and Hoorn (The Netherlands) and in London (United Kingdom). She is associate professor in the Federal University for Latin American Integration, in Foz do Iguazu. Currently she is a visiting researcher in the Vrije Universiteit Amsterdam, where she studies solid residue management (plastics and organic). She lives with her daughter in Hoorn. In Brazil, she had worked for theGreenpeace campaign for the creation of Extractive Reserves Porto de Moz and Verde para Sempre, in Pará in 2003. For 14 years, she researches in the Indigenous Territory Vale do Javari, in Amazonas, in 2006 and 2009 she was financed by CAPES and CNPq. In 2011, she produced a health diagnosis for the Vale do Javari, for Instituto Socioambiental (ISA) and Centro de Trabalho Indigenista (CTI). With Céline Cousteau’s team, she works for the documentary Tribes on the Edge since 2012. The film should be due in 2017. 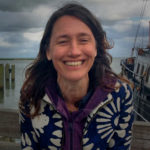