By Piero Locatelli and Guilherme Henrique, from Repórter Brasil

It is not just the sale of gold illegally mined from the Yanomami Indigenous Territory that fills the pockets of those associated to gold mines. Pilots and aircraft owners working in the area have also been getting richer, some earning as much as R$ 200,000 a week, according to the Federal Police. They are responsible for the logistics that supports the mining activities at the TI, where small aircraft are the main means of access, since the indigenous territory is far from roads and crossed by poorly navigable rivers.

There are countless operators who control the TI’s airspace and are sure about their impunity – a certainty that arises from the lack of inspection, from the close connection of miners with politicians and even from contracts with governmental agencies. “If we disrupt their logistics, illegal miners will suffer a heavy blow”, says prosecutor Alisson Marugal. “But inspection, under the responsibility of Anac (the National Civil Aviation Agency) and FAB (Brazilian Air Force), is very fragile”.

Indictments brought by the Federal Public Prosecutors’ Office (MPF) based on three major investigative operations in the last decade reveal the large number of people involved in the logistics of illegal mining: of the 87 indicted, at least 8 were pilots and another 31 were members of “support teams”, working as clandestine radio operators and input suppliers.

To understand how this enormous network works – which enables the destruction of the Yanomami territory, families and way of life –, just look at the case of Valdir José do Nascimento, known as Japão. Described by the MPF as the “greatest promoter of illegal mining activity in the Yanomami Indigenous Land”, he owns at least three planes that are allegedly chartered to illegal miners. The Federal Police learned from of one Nascimento’s employee that in just one week more than 20 flights take place to and from the mining site.

“It is known that each flight to the gold mine costs an average of 10 to 12 grams of gold (R$ 10 thousand to R$ 12 thousand), so in just one week, the criminal organization earned a profit of around R$ 200 thousand”, points out one of the investigations.

A daily planner seized by the investigators shows that Nascimento chartered at least 221 flights for other offenders. Those flights were used not only to transport the gold, but also to transport workers, food, fuel and instruments – essential tools for extracting the metal. Weapons and ammunition were also shipped and sold by Nascimento to other miners in the area.

Nascimento’s role in mining went beyond the air charter. He also owned ferries used in the extraction of gold and headed a network of miners, suppliers of fuel, weapons and ammunition. According to the MPF, his group “has a complete vertical domain of the mining activity”, including control of sales to intermediaries in Boa Vista. Nascimento was investigated as part of the Xawara operation, the first by the MPF to scrutinize the mining in the Indigenous Territory, in 2012. Nascimento did not respond to the reporters’ calls.

Airports that provide support to miners operate without restrictions

Impunity is also the rule when it comes to land-based logistical support, operated from the outskirts of Boa Vista, where the Barra dos Ventos aerodrome is located – the main departure and arrival point for flights to and from the TI. This is where owners park their planes, where planes undergo maintenance and the departure point for flights, according to the Federal Police.

The airport is controlled by Adão de Pinho Bezerra, whose fleet carries, in addition to food, fuel and machinery, a series of misdemeanors. Even before his planes were found to be part of the illegal mining logistics, Bezerra had been indicted by the MPF-RR in operation Metastase for fraud in contracts and bidding procedures for air charters supplied to Funasa, in 2007.

Despite the findings of the Federal Police, the airport is still operating, according to Anac. It remains  open and continues to be used for air traffic heading for illegal mining sites. The reporters tried to contact Bezerra through his attorney but got no answer.

Cases such as those of Nascimento and Bezerra show how actions against the logistics of mining have been insufficient. “Weakening this network is one of our strongest tools to end illegal mining”, says Attorney Marugal. “The destruction of [illegal]airstrips, which is the responsibility of the Army, the Federal Police and Ibama, actually happens. But shortly thereafter another airstrip is built in their place”.

In order to avoid this scenario, the Yanomami ask, in addition to more control over the TI airspace, the assignment of agents to prevent the building of new clandestine airstrips – there are currently 36 of them, mostly used by miners. In a letter sent to the Federal Police, the indigenous people claim that the simple destruction of the airstrips  is not enough; they argue that any plane found [at illegal airstrips] should be auctioned off, or even used by the government itself to inspect the land later on.

“Deactivating airstrips costs a lot for the government and very little for criminals, who rebuild them in two weeks”, says the Association of the Yekuana People of Brazil” . It is essential to auction off the planes and other assets such as trucks used in the commission of crime, they could be made available to Funai, the Federal Police, ICMbio and Sesai”. 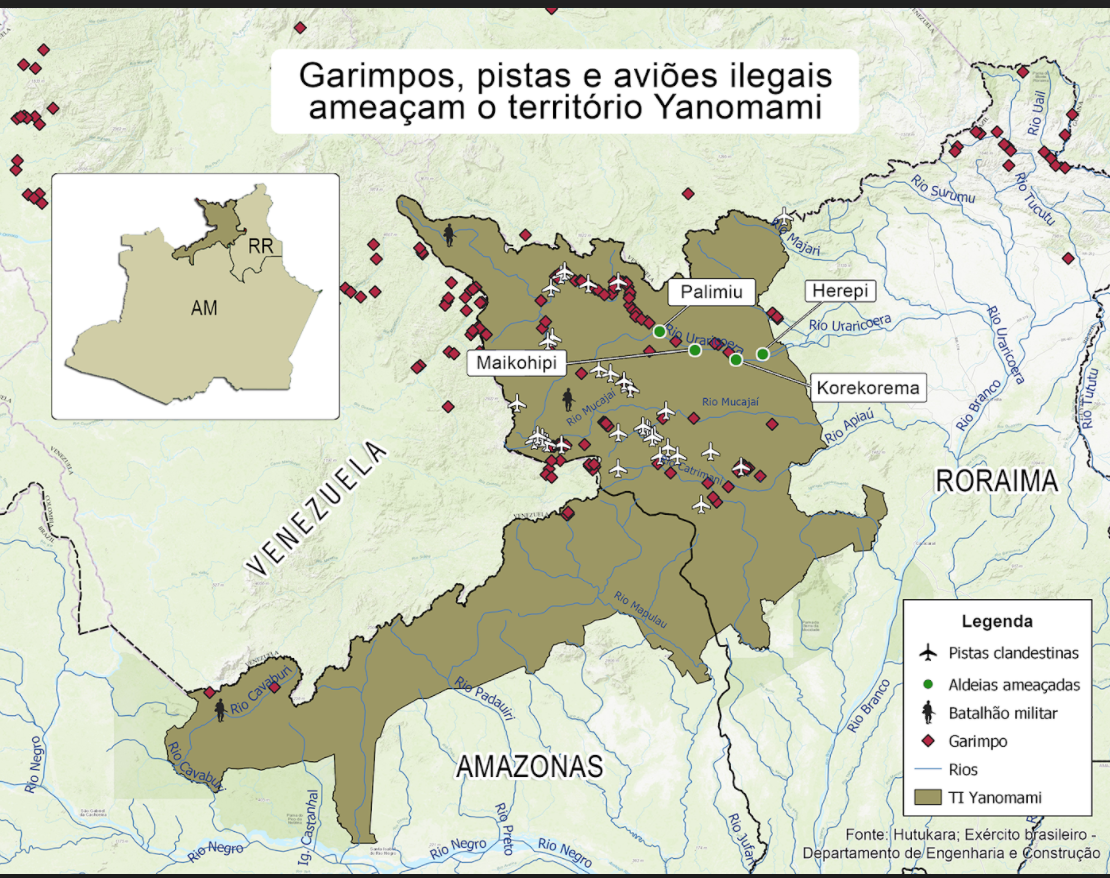 Geographer Estevão Benfica Senra, who researches the issue of illegal gold mining says that “disrupting logistics” should be a priority in the fight against illegal mining. For Senra, the strictest control would include destroying airstrips, inspecting state-owned aerodromes and re-registering and inspecting all planes that pass through the location.

“With such disruption, you would create a situation where the miners themselves would volunteer to leave the area”, says Senra. According to him, even if logistical control did not prevent all mining activity at the site, it would reduce the problem to a more manageable scale. The specialist emphasizes that the solution to the problem would involve joint action from different government agencies, such as Anac, Funai, the Ministry of Defense and the National Mining Agency.

When contacted, Funai stated that “it recognizes the existence of clandestine airstrips located in indigenous areas, but it cannot accurately state their number”. The foundation also said that it “supports the Ministry of Defense and the Federal Police in inspections of clandestine airfields in the interior of Indigenous Lands”. Funai did not respond to inquiries about the number of operations and specific actions with this purpose.

Anac stated that the agency “does not have legal jurisdiction to destroy or interdict clandestine airstrips”. According to Anac, “any potential violation that is identified and that is not under the jurisdiction of the Agency is reported to the Public Prosecutors’ Office and to the police authorities so that the appropriate measures can be taken”.

The records of Federal Police investigations obtained by Repórter Brasil in partnership with Amazônia Real under the Access to Information Law also reveal the relationship between pilots accused of involvement with miners and politicians in the state of Roraima.

Through phone tapping, the federal agents identified calls from pilot Thiago Cappelle to state congressman Marcelo Cabral (MDB) and to Guilherme Campos, the son of the former governor of Roraima Suely Campos (PP).

Cabral’s press office informed that the relationship with the pilot “was strictly business-related”. According to the note sent to the reporters, “in 2018, the congressman needed to fulfill his official duties in cities and towns in the interior of the state, far from the capital, Boa Vista”. The reporters were unable to contact Guilherme Campos.

In addition, Cappelle acquired aircraft prefix PT-KEM from Senator Chico Rodrigues (DEM-RR), infamous for being caught by the Federal Police in October last year, trying to hide R$ 33 thousand in his underwear, during an operation at his home, in Boa Vista.

In fact, this aircraft has a storied past. As reported by Repórter Brasil in March, the senator owned this plane from June 13, 2011 to February 28, 2018, according to a certificate issued by Anac. The plane entered the territory airspace several times between 2018 and 2019. First, while under the property of the senator, who had also been governor of Roraima, and later under the command of Cappelle.

Chico Rodrigues dodged the investigation, but the same cannot be said about his nephew, Leonardo Rodrigues Moreira. According to testimony obtained by the Federal Police investigation, Leonardo, who was a city councilman in Boa Vista between 2016 and 2020, owned a mine in the indigenous land. He was never indicted by the MPF.

Senator Chico Rodrigues told Repórter Brasil, in March, that “at the time of the facts, he had already transferred ownership [of the plane]”, but he did not send documents to back up this information. He also said, through his press office, that during the period in which he actually owned the aircraft, “he did not fly over any illegal mining site”.

In addition to being close to politicians, at least two of the owners of the aircraft that flew over the mines have contracts with government agencies. In practice, the Brazilian taxpayer’s money ends up remunerating those who work and provide logistical support for illegal miners.

Cappelle, indicted by the Roraima MPF by the MPF in 2020 for his involvement in a criminal organization, is one of those cases. A document obtained by Repórter Brasil shows that he was appointed, in 2015, to a commissioned position as a pilot for the Roraima Military Household. Neither Cappelle nor the Roraima Security Department responded to e-mails from the reporters.

Icaraí Turismo Táxi Aéreo has signed contracts with the Ministry of Health for services on Yanomami land during the pandemic. The company received R$ 24.3 million from the public coffers, R$ 17 million of which were paid during the Jair Bolsonaro administration, according to O Globo newspaper.

Last year, the National Civil Aviation Agency (Anac) initiated proceedings to investigate possible irregularities committed by Icaraí Turismo Táxi Aéreo. Since June 17, 2020, the company’s operations have been suspended, due to a decision issued by Anac. Still, the company continued transporting indigenous people and DSEI teams, according to O Globo.

The Ministry of Health stated that “all contracts follow the law strictly and any irregularities must be investigated by the police authorities.” Icaraí Turismo Taxi Aéreo did not respond to questions submitted by the reporters.

The Federal Police and the MPF suspect that Mello’s aircraft are involved in the scheme conducted by Pedro Emiliano Garcia, also known as Pedro Prancheta, convicted of genocide against the Yanomami people in the 1990s who, according to the MPF’s charges, continues to operate in illegal mining sites. Prancheta was indicted by the MPF in three cases involving illegal mining at the TI, criminal organization, environmental damages, misappropriation of federal resources and clandestine communication.

Read also: ‘Bolsonaro’s mining bill will turn into a mess’, says the living memory of mining in Brazil

Read the articles from the series

Lawless skies are controlled by miners

‘I’ll buy everything’: Yanomami gold is freely sold at Rua do Ouro

Romero Jucá, the ‘worst enemy’ of the Yanomami people

‘Bolsonaro’s mining bill will turn into a mess’, says the living memory of mining in Brazil